In our meat eating days, we enjoyed Hickory Farms turkey sticks. They were sold as a seasonal item and we waited with anticipation. Let me just say its been a long time since those days but this is a similar taste as to what my family and I remember, albeit not as rich.

This recipe makes two medium sized sausages. They are easy to slice for sandwiches and wraps. I recently added slices to a veggie stir-fry. We have served slices with crackers and vegan cheese as a game snack. I’ve put chunks into vegan Mac and cheese. The possibilities I am discovering are endless. Anywhere you would typically have used processed meat, this is a perfect plant-based alternative.

The recipe calls for a block of tofu drained. Drain the tofu, wrap it in paper towels to pull off the excess water, it doesn’t need to be pressed. There are two flavors of liquid smoke available I have used both, so you can use whichever you prefer. The more flavorful BBQ sauce you use the more flavorful your sausages will be, so select based on your tastes.

I froze sausages in slices and it thawed just fine. The pieces I thawed I used in a stir-fry so perhaps the best way to use sausages that you have frozen is in something you are cooking.

Begin by placing a large pot of water on medium heat so its heating while you are preparing the sausages. In a food processor, add everything except for the vital wheat gluten. Once you have the tofu and the seasonings pureed add in the vital wheat gluten and just pulse until it’s incorporated. Take it out and knead it just a bit until it’s not crumbly and its more like dough.

Once you knead it a few times, it gets a smoother surface. Don’t knead it too much as it will make the sausage have a rubbery texture. Tear off two sheets of aluminum foil, and divide the dough into two equal portions.

Roll the dough with your hands until you have two log shaped pieces.

Place the summer sausages in boiling water and allow to simmer on a low boil for 1 hour. Then just cool and enjoy. Store them in the refrigerator or freeze in an airtight container. 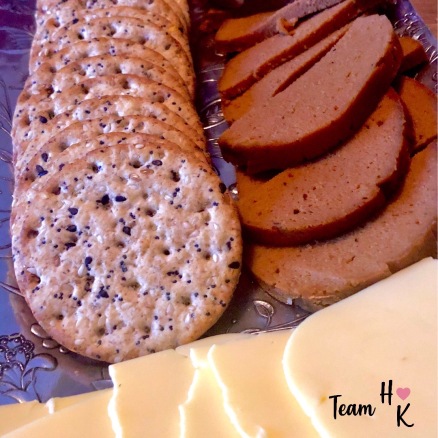 My name is Renae Long, I am a wife and a mother of three boys. February 29, 2016, my husband suffered a massive heart attack. His cardiologist told us we needed to change the way we eat, in order to reverse his heart disease. Over the next two weeks we made some big changes, tossing everything we had been taught about food out the window. Follow me as we take on the challenge of a whole food plant based lifestyle and learn how great a body can be! HeartHealthy TheHeartieKitchen ❤️ur❤️ View all posts by Renae Long

Amazing dinner! Yes it’s vegan! Homemade pizza, notice those tasty tofu chunks, olives, mushroom, green onion! Along with a side of steamed beets. Beets are so good for you, natural vasodilators. Lastly, a side of quinoa and red beans. My rice cooker died so we had to make this quinoa the old fashioned way. Just read I’m supposed to be rinsing the quinoa, oops 😬. Plant based and heart healthy. ♥️ur♥️🌱💪🏼
Check out this breakfast creation! I got caught a mile from home in a pop-up thunder storm this morning and my walk became a mad dash for home. As I stood on the lanai trying to determine if it was going to relent my sweet hubby brought this to me. Yum! He’s trying to replicate an amazing breakfast we had in Key West. There’s no time like the present pandemic that never ends to get healthy! You only have one heart ♥️! ♥️ur♥️🌱💪🏼
Quinoa beet bowl with a side of vegan macaroni and cheese. We substituted @oatly instead of water in the cheesy sauce and it was super creamy. Definitely a substitution worth repeating. The recipe for the vegan Mac and cheese is on my blog found in my bio. Take care of your body you only get one! Love your heart! ♥️ur♥️🌱💪🏼
We stopped at @kalemecrazy in Alpharetta for brunch/lunch this morning and we found some amazing vegan options. We tried the vegan wrap with added extra avocado and the kale salad. Both were excellent! Love finding vegan food while traveling that isn’t a deconstructed salad. 🌱💪🏼 Heart healthy ♥️ur♥️
My hubby just came home with this! One of my all time favorites is this amazing vegan chocolate peanut butter shake from @islandorganics!! He didn’t even get one for himself! Love him!
Brisket! Yes…you read that right, melt in your mouth, tasty, brisket. Plant based of course! Left overs for days! The recipe comes from my favorite BIL, close relative of @stephanienieset. Fun to have healthy, plant based family members to share recipes with! You guys the aromas coming from the grill were heavenly. ♥️ur❤️🌱💪🏼
Friday night dinner! Completely plant based and home made🌱💪🏼
Super easy Heartie Kitchen miso soup.
Look at that bun! I love these @daveskillerbread 21 whole grains and seeds! This was my first attempt at making vegan chicken patties…they were repeatable. Not as good as @wildspork food truck though so if you can get to Cleveland those are truly amazing! My chicken patties were tasty with tomato, lettuce, mustard (of course) and avocado. A side of coleslaw made the old fashioned way just substitute dairy free Mayo for regular. I want to make the burgers one more time before I post the recipe so stay tuned and stay healthy. So important today in light of current health events to keep our bodies as healthy as possible. Give your heart some love, we only get one. ❤️ur❤️
Hey heart healthy friends, Chickpea chicken salad over a bed of baby spring mix. Yum! The recipe for the chickpea chicken salad is on my blog @theheartiekitchen found in my bio. This was dinner last night along with some left over split pea soup. My family chose to have chicken salad sandwiches also a great option. This is day 9 of the @freshlife Daniel fast. 🌱💪🏼 ❤️ur❤️
Loading Comments...
%d bloggers like this: